Ron Conway, Another Reason Why The Valley Rocks

I love discovering these moments in time preserved on YouTube: here’s All Things D‘s Kara Swisher interviewing legendary Valley Angel, Ron Conway in 2008. At that time Facebook had a whopping 22 million users–about the number of people they acquire each quarter now by conservative estimates.

Kara: Not just a hyped trend?

Ron’s been right about a lot of things, including his steadfast belief in the value and wealth creation of the internet, in entrepreneurs and the intersection of Tech, Popular Culture and media. Here’s a great article about Ron in Fortune Magazine where Twitter’s Biz Stone coins the term “Rontourage” for the circle of influential people following him on valley tours.

I remember a different kind of Rontourage when I was young. As an altar boy in 7th & 8th grade at Nativity Church in Menlo Park, I recall services where Ron and his dozen brothers, sisters and other family members spilled out of the last row. Ron and a few of his brothers would stand behind a full Conway pew, hand on their mother’s shoulder. It was clear the importance family, community and faith held for each of them.

If I sound like a fan, I’m being clear. I’ve know entrepreneurs that will attest to the spirit of the Fortune article and are fans as well. Ron’s an example of what makes the Valley great. He’s another reason why no where else has replicated the success of the Valley in infrastructure, performance and value creation.

Great Panel for SXSW–“Bubble or Bubbly” 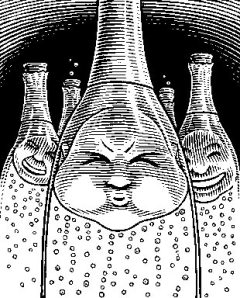 I’m looking forward to hosting a great panel on Saturday, March 12 from 3-4pm at South By Southwest (SXSW) Interactive on the PepsiCo Plugged-In Stage in the Austin Convention Center called “Bubble or Bubbly” exploring the topic of froth in Tech valuations from a number of perspectives. We’ll look at root causes, lessons learned, success and horror stories, adaptive behaviors and some thoughts about how to navigate going forward. For marketers, these same questions have to be asked to evaluate bets in emerging platforms with an eye towards leveraging the innovators advantage and disrupting early and often. The panelists are some of the best in the world to address this subject:

Let’s get this party started!

We took a briefing by Dave Sanguinetti, CEO of RealGifts, one of the 20 technology start-ups invited to present at Pepsico10. This start-up recognition early in their lifecycle by delivering real world version of Facebook virtual wall gifts. Their solution created quite a buzz at Facebook’s F8 conference and later when they entered and won the second-round FB-Fund award. This exposure paved the path to what was their most prized reward: a relationship with Facebook powering their gift area.

There are many changes in the Facebook strategy and socialgraph populating activites, and there an equal volume of broken links to the storefront and other pages on Facebook related to RealGifts. Hard to say what the future holds for them. Their challenge, it seems, is to continue to grow their value outside of Facebook while hoping to continue leveraging their strategic relationships at the SocialNet to grow and provide proof of  adoption.

Barriers to entry? Real-Gifts has a network of developers, partners and complexity of building out the equivalent of a mini-amazon ecommerce site. They solved some of the problems around not having a physical address by offering a proxy system that allows the recipient to direct the gift to the address of their choosing without revealing it to a broader socialgraph.

How do brands get involved? (4:30) Mrs. Fields Cookies, FTD, Fandango, etc.—found people really like the real world versions of gifts.

Pepsico10 impressions? (6:45) Comparable with Facebook FB Fund Competition. Unique for a big brand like Pepsi to engage start-ups in this way. Sense of excitement and camaraderie with participating start-ups as well.

You met Michael Gaiss, Senior Vice President at Highland Capital Partners, in the last post where he discussed impressions of partnering with Pepsico on the innovative Pepsico10 event. We took the opportunity to ask Michael how HPC prioritizes opportunities with the idea that these same principals can apply to marketers trying to keep pace with the explosion of channels and technologies in digital. In each case the investor is putting their money on a bet and want to mitigate risk with a system that favors their investment. END_OF_DOCUMENT_TOKEN_TO_BE_REPLACED

A VCs Take on Pepsico10

We spoke with Michael Gaiss, Sr Vice President out of Boston for Highland Capital Partners, July 28 at Pepsico10 about HCP’s role in the event, some impressions and themes. We also did a quick follow-on interview to see how HCP qualifies investments for emerging technology companies and how that can align with how marketers make bets in new spaces. We’ll present the follow-up in a future post.

Here’s our video interview with summary notes below: